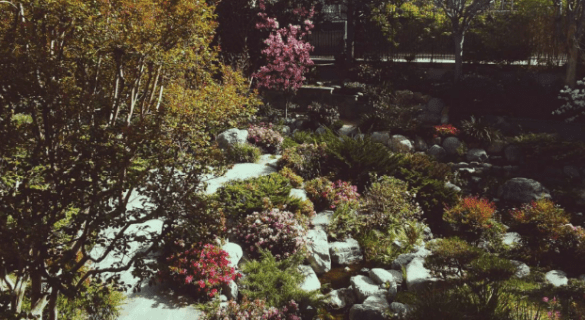 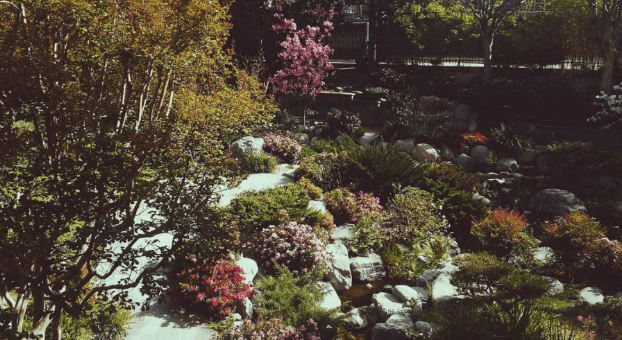 Established in 1985, the Japanese American National Museum is dedicated to sharing and advocating the richness of the Japanese-American experience. A landmark in the Little Tokyo District, the institution explores the duality of adopted cultural celebrations, like Hello Kitty, and also unravels the impact of America’s wrongful World War II policies on Japanese Americans. For more information, visit janm.org or call 213.625.0414. (Closed Mondays)

The Go For Broke Monument is a tribute to the Japanese-American soldiers of World War II who fought to serve America and prove their patriotism, while their families experienced discrimination or racial prejudice during this time. A black granite monument is engraved with the names of more than 16,000 Japanese-American men and women who served during the war. “Go For Broke” was the motto of the 442nd Regimental Combat Team. (Education Center closed Mondays)

One of the most well-kept secrets in Little Tokyo is the James Irvine Japanese Garden, also known as Seiryu-en, or “Garden of the Clear Stream.” The green space was designed in the Zen tradition with a 170 ft. stream flowing from a waterfall. Stepping stones, cedar bridges, stone lanterns, trees, and foliage underscore the pacifying sound of cascading water. (Closed Mondays and for private events)

Founded in 1912, and officially known as “Koyasan Beikoku Betsuin of Los Angeles,” the non-profit religious institution is one of the oldest existing Buddhist temples in North America. In 1989, the temple was designated as the keeper of the Hiroshima Peace Flame. On the last Sunday of the month at 1:30 PM, a “Goma Fire Rite” is performed, a ceremony that originated in India more than 5,000 years ago. Weekly Buddhism classes in English and Japanese are also offered.

Sushi Gen is perhaps the most coveted reservation in Little Tokyo. If you have a hankering for tuna belly, red snapper, mackerel, shrimp, salmon, or albacore, this restaurant will hit the spot. (Closed Sundays and Mondays)

Known for its 30 min.-1.5 hour wait, Daikokuya is a ramen-focused restaurant with a loyal following. The namesake daikokuya ramen with kotteri is the preferred menu selection, but there are vegan, gluten-free and omnivore options alike. Arrive 15 minutes before opening for the first shot at seating. Cash only.

Opened in 1910, the Japanese dessert shop within the Japanese Village Plaza is said to have started the mochi rice cakes craze.

Wolf & Crane is Little Tokyo’s go-to for Japanese whiskey and cocktails. A DJ spins while a lively crowd convenes. The bar borrows its name from the nearly 3,000-year-old fables of Aesop and plays to the history of the Japanese American community in downtown Los Angeles, where the Honshu Wolf and Red-Crowned Crane are sacred to Japanese folklore.