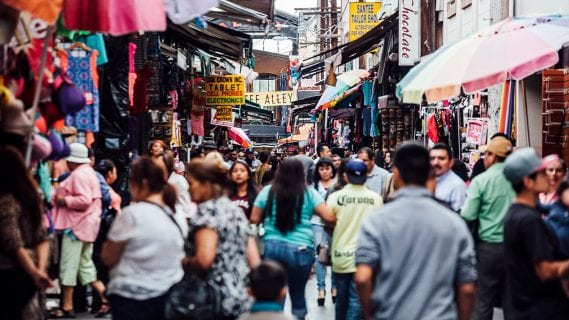 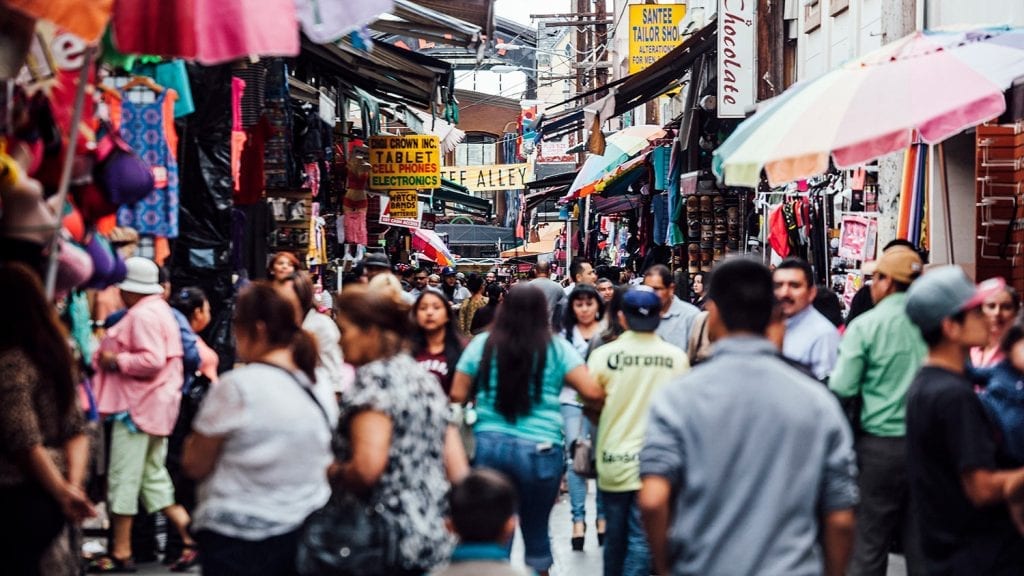 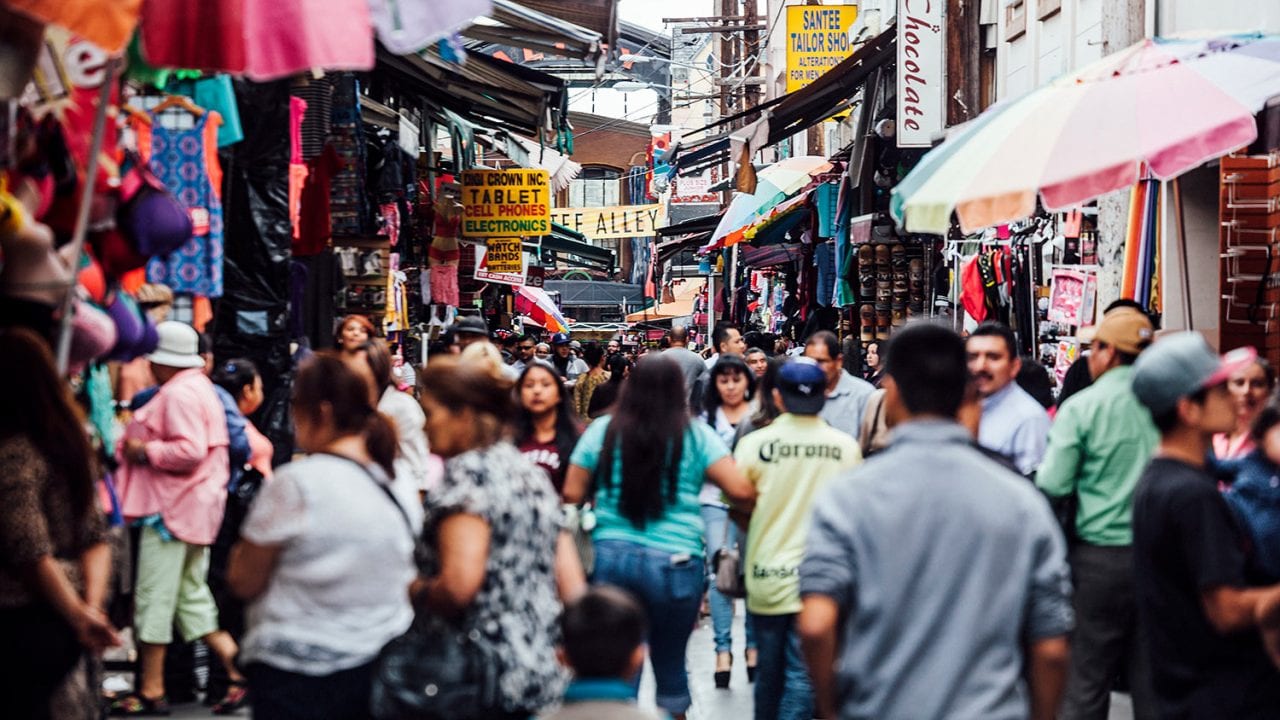 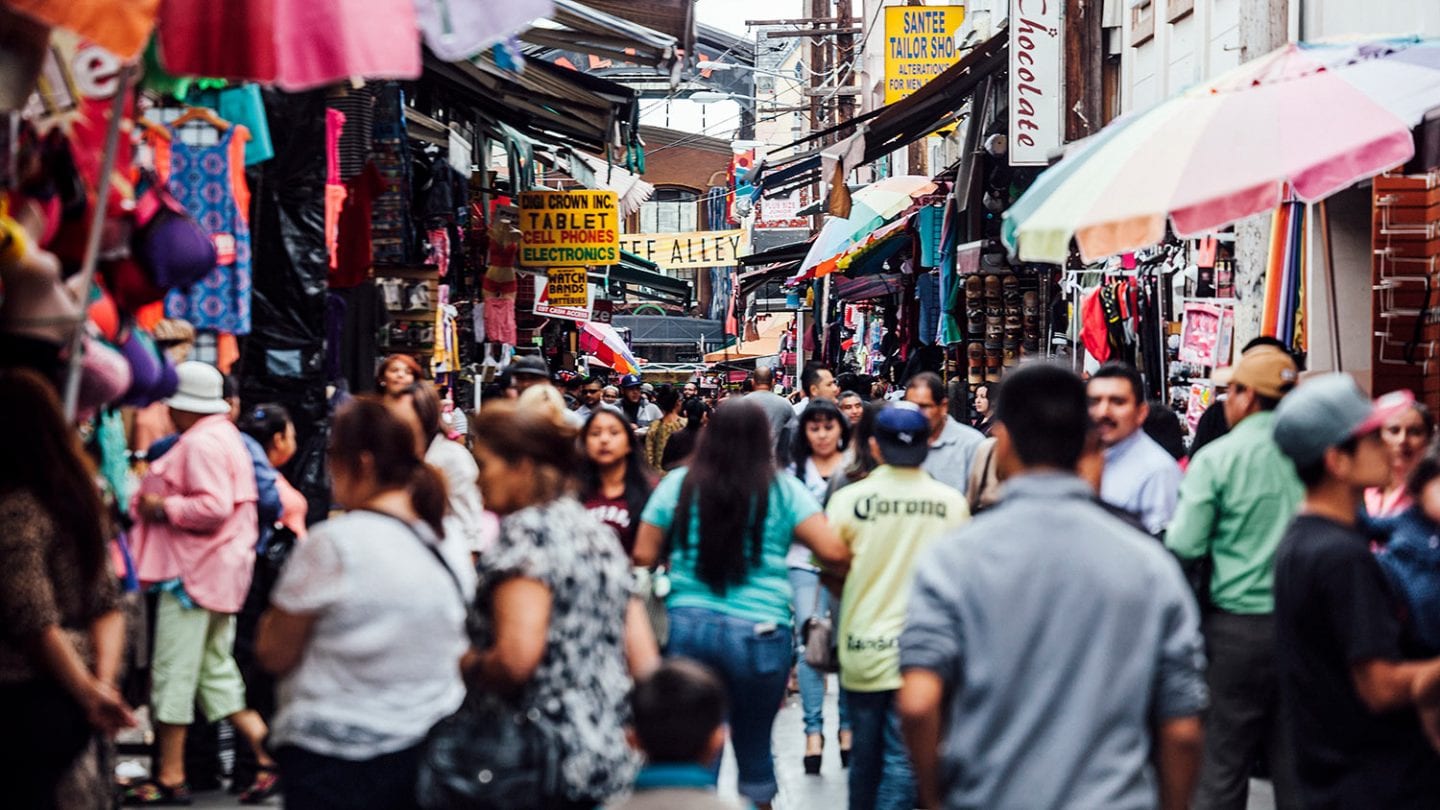 Rodeo Drive may be the best known address for shopping in the City of Angels, but the true heart of the city’s shopping scene—and the West Coast’s entire apparel industry’s hub—is downtown, where nearly 100 square blocks form the Fashion District. DTLA’s Fashion District has been booming with activity since the early 20th century, and today, more than 1,000 independent retailers, it still draws in-the-know Angelenos on the hunt for formal attire (often fresh off the catwalk), jewelry, swimwear, denim, and household goods. And the best part? Many of the clothing on offer comes from brands you love, but at wholesale prices.

So before you venture to Beverly Hills, follow the locals and use this guide for shopping in the Los Angeles Fashion District.

Getting To The Fashion District

The LA Fashion District covers the southern portion of DTLA, just a mile southeast of major attractions like the Staples Center (and Hotel Figueroa).

Accessible from major freeways like the 110, 101, 10, 5 and 60, the Fashion District has more than 100 parking lot located throughout the area. Those using public transportation can get there via the Metro DASH Bus – The LA Fashion District located along DASH D& E lines, but a car is recommended if you plan on doing some serious shopping. The entrance into the Fashion District varies based on where you’re coming from, but the map below shows which streets form the district. Check out the official LA Fashion District Map here.

The Fashion District is at its liveliest on Saturdays and Sundays, but shoppers can get their hands on discounted goods from select retailers every day of the week. General hours are 10:00AM-5:00PM, though exact hours for each vendor may vary.

Cash is king in the Fashion District, and while some retailers accept credit cards, it’s recommended that you bring cash or prepare to use one of the many ATMs in the area. Comfortable walking shoes are a must if you want to see as much of the district as possible, and there are plenty of restaurants and food vendors in the district if you work up an appetite.

Looking for menswear? Hoping to say yes to the dress? The LA Fashion District is roughly grouped so that you don’t need to wander far. Here’s a rundown:

Kids’: Kids clothing (formal and informal), is centered on the two square blocks of Pico Boulevard and 12th Street between Maple Avenue and San Julian street.

Textiles: The four-block area from 8th Street down to Olympic Boulevard between Maple Avenue and San Julian Street

Wedding and prom gowns: Santee Street from Olympic Boulevard down to 14th Street

Wholesale Marts (for trade members): On the corner of 9th and Los Angeles streets major wholesalers like California Market Center, Cooper Design Space and New Mart often hold sample sales open to the public, usually on the last Friday of the month. Plus: San Pedro Wholesale Mart on the corner of 11th and San Pedro streets; and LA Mart (located inside The REEF) at South Broadway and Washington Boulevard

Women’s: The vast majority of the LA Fashion District is devoted to women’s clothing, and you’ll find boutiques across the area. Particularly popular corridors for women’s stores are Pico Boulevard between Main and Santee streets; Santee Street between 9th and Pico; and Wall and Maple streets between Olympic and 12th.

And Don’t Forget The Flowers

Shop or browse beautiful blooms at the Los Angeles Flower District, a six-block collection of wholesale and retail flower vendors located within the Fashion District along the 700 block of Wall St. between Maple St. and San Julian St., and from 7th to 8th St. Here you’ll find the Original Los Angeles Flower Market, a 50,000 square-foot space that is the largest flower market in the country, as well as the California Flower Mall.

For more information on the Fashion District, visit the official website here.