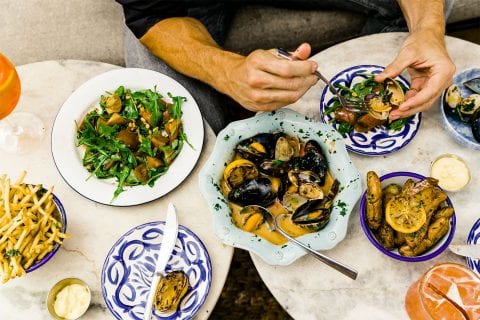 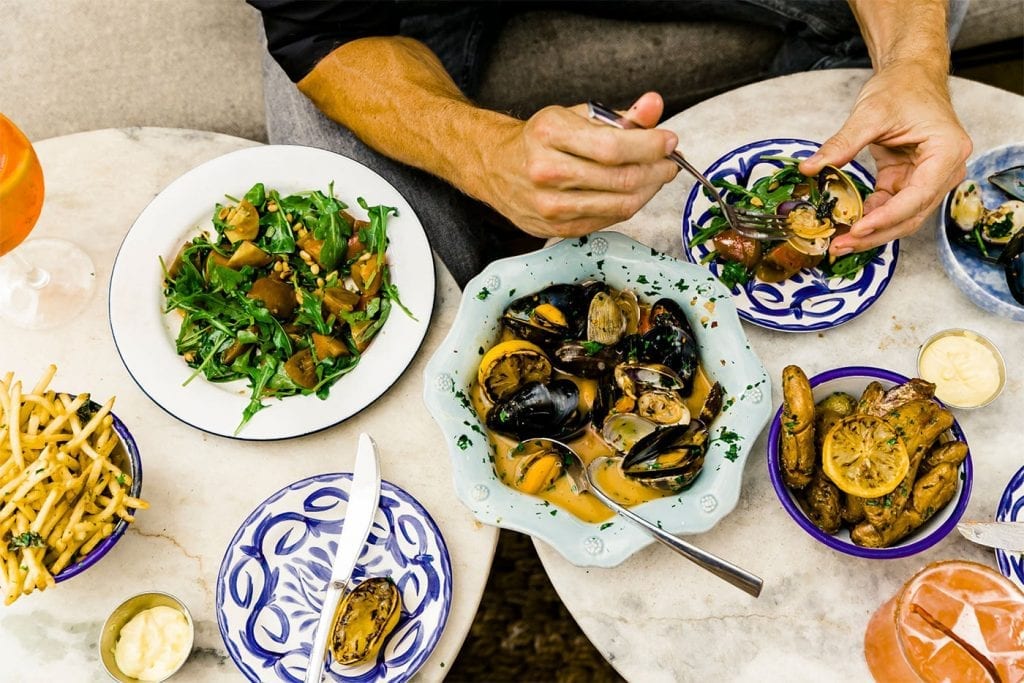 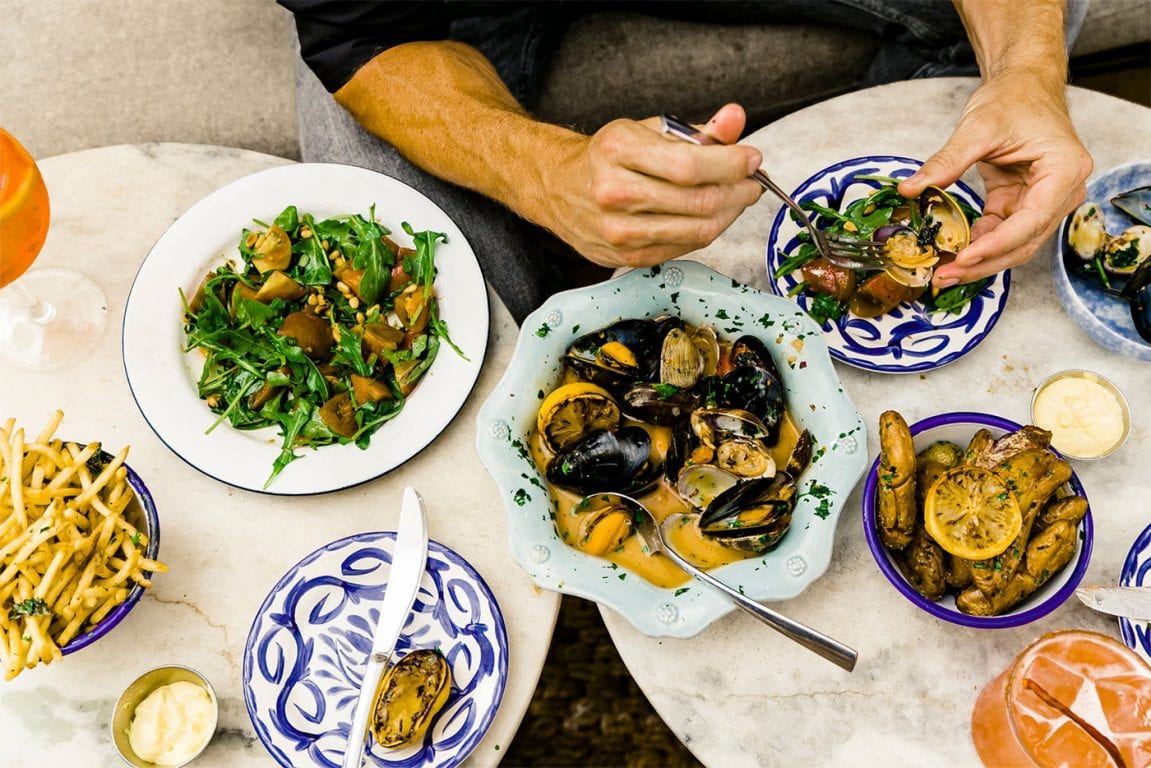 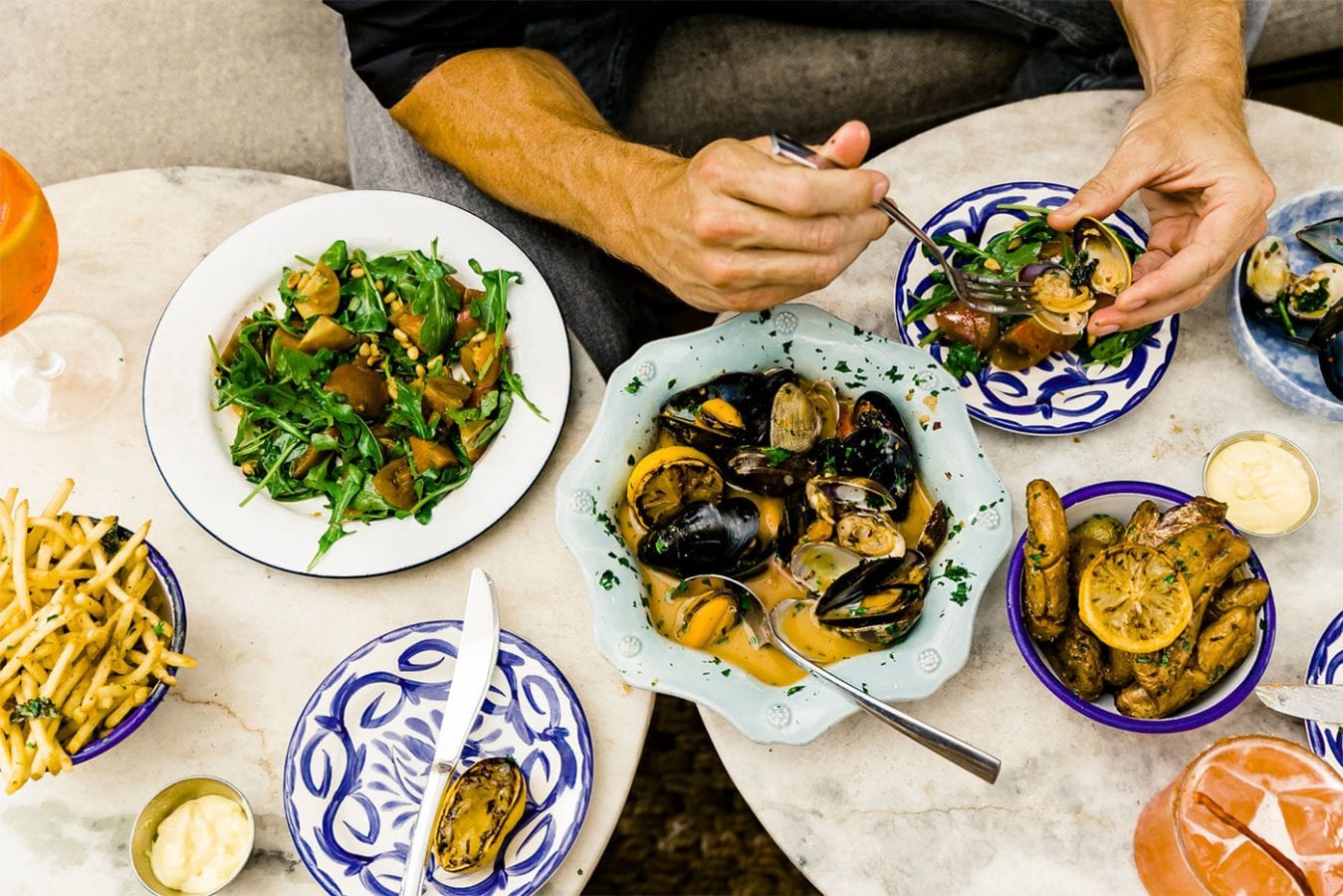 Los Angeles is in the midst of a culinary renaissance, with forward-thinking chefs shaking things up—and earning national acclaim—across the city.  Many of the the restaurants leading the way call downtown Los Angeles home. Here are some of the best spots to eat at now, from buzz-worthy Mediterranean to boozy brunches.

Since opening at Hotel Figueroa last year, Breva has been DTLA hotspot for Basque and Mediterranean-inspired Basque cuisine. The emphasis here is on communal dining over small plates, including classics like squid alla plancha alongside new favorites like blistered padrón peppers, served with labneh and peaches. Breva: 939 S Figueroa St.

Following their success from Bestia, an Italian restaurant that helped put DTLA on the food map back in 2012, owners Ori Menashe and Genevieve Gergis have opened Bavel. Seven blocks away from their first spot, Bavel has transformed a former warehouse into a gorgeous, cream-hued sanctuary for slow-cooked Middle Eastern fare, like fried quail; grilled lamb saddle chops. Bavel: 500 Mateo St.

Head to City Market South to get a taste of Chef Steve Samson’s Bolognese-meets-Californian cuisine, where guests watch as the team in the open kitchen churns out dry-aged ribeyes, seasonal risotto, and vegetables roasted over coals. The spacious new DTLA restaurant has a vaulted dining room and a patio, and the marble bar is so inviting that you’ll actually want to hang out there before sitting for dinner. Rossoblu: 1124 San Julian St.

David Chang of Momofuku fame has found a home for his first Los Angeles restaurant in DTLA, bringing his version of noodle and rice dishes, seafood, meats, and veggies to the West Coast. Standouts at Majordomo include the macaroni and chickpeas, topped with generous slices of shaved black truffle. Think you’re in the mood for some epic short ribs? You’ll have to call a day in advance for them, but they’re worth the planning. Majordomo: 1725 Naud St.

Not far from the Staples Center and Hotel Figueroa, Chef Ray Garcia’s Broken Spanish dishes out contemporary Mexican cuisine in one of DTLA’s most vibrant and sophisticated restaurants. The chicken in carrot mole and ginger sofrito is elevated Mexican fare at its finest, and the mezcal and tequila cocktails are the perfect way to unwind. Broken Spanish: 1050 S. Flower St.