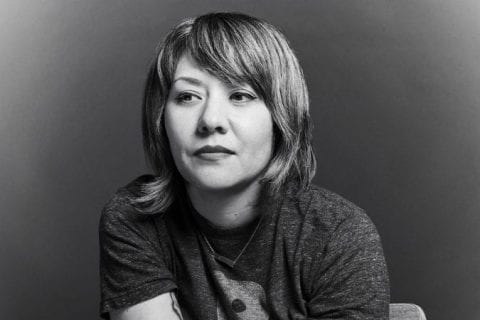 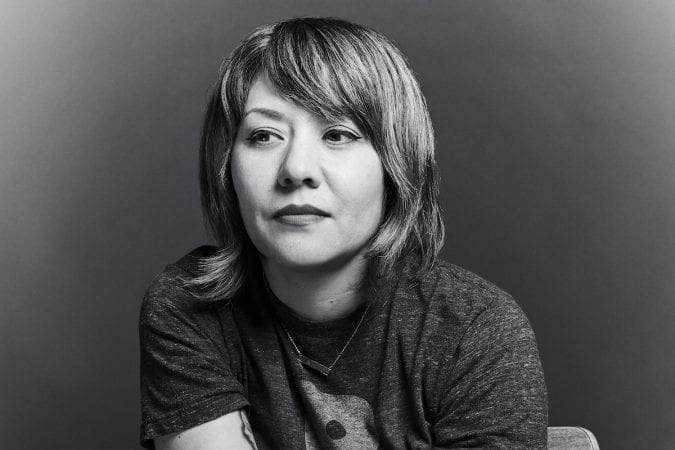 You can stare deep into the eyes of the portraits on view in the Hotel Figueroa gallery. They’re intimate, raw and deeply personal, all-the-while devoid of any context—painted without a background on wooden boards and white canvas. The woman behind the works is Shizu Saldamando, a mainstay in the Los Angeles arts scene, and Hotel Figueroa’s inaugural Artist-in-Residence.

Born in San Francisco to Japanese-American and Mexican-American parents, Saldamando has devoted her career to highlighting subcultures and investigating social constructs, most often through portraits of people she runs into at house parties, music shows, dance clubs and other hangouts in LA.

“People that come to LA often think it’s just Hollywood,” she says. Her art shows “an added view” of the city. And while the subjects are usually LA locals, the portraits have been shown around the world, including at the National Portrait Gallery in D.C., the Venice Biennale.

We recently caught up with Saldamando to learn more about her craft:

Do you remember your first portrait?

I remember as a child sitting in a corner at my mom’s work and drawing huge faces that took up the entire paper with these tiny little square bodies. I think those were maybe my first portraits.

What drew you to the medium?

I always took art classes in school if there was an option for an elective, and drawing was usually the first step in any institutional setting for studying an art practice. Drawing has always been my “go to,” in that it’s so immediate and so accessible as a medium…The easiest thing to do is draw on your paper. It also doesn’t carry the loaded weight of the historical art canon like painting does. There is a little less judgment about it—at least I find—than with painting.

Your subjects are real people in your life, right?

Most of the people I draw are friends or family who I socialize with or whom I consider peers, like other artists and creatives. Since I moved to Los Angeles in 96 I’ve spent most of my time working and partying in Downtown, East LA and South East LA neighborhoods so I’ve naturally gravitated towards depicting people from these areas, mostly LA natives.

Why do you think they’ve resonated so well with strangers who don’t know them?

There are whole demographics that are continually ignored in mainstream media. Maybe, when people see my work they see real people that inhabit LA that aren’t all Midwest transplants seeking to make it in the entertainment industry.

Artist Shizu Saldamando uses wood and blank canvas for the backdrops of her portraits.

Your artist statement from the NPG mentions your hope “to disarm fixed hierarchical social and artistic constructs” through portraits. Could you talk a little more about that idea and how your art achieves it?

By depicting familiar people that are a part of my life, I hope to show a broader idea of who can inhabit art and who creates culture in general. I like depicting creative peers who inhabit and have created their own social constructs; their own backyard punk shows, queer clubs, underground fashion shows and the like. Often, people of color are depicted in media in one-dimensional narratives—if shown at all.

I like to make pieces of contemporary people who are…multifaceted and fluid, and who don’t adhere to fixed narratives that are constantly rehashed in media. I aim to illustrate those who actively reject those narratives by creating their own social scenes. I use wood, collage, glitter etc. as a way to pay homage to the different social spaces we all inhabit and give nod to craft, kitsch and high art all at once.

How did you prepare for the exhibit?

We had to find work that was already in my studio. It’s called “Selected Works” because there isn’t one thread; it culls from all of the exhibitions I’ve had. It’s a mixture of different times.

How does the experience of having your work at the hotel differ from having it at a traditional gallery?

It’s an honor because you’ll get different responses from people who don’t normally go to galleries. More people are going to be able to see the work then if it were up at a gallery. Countless people pass through that gallery and it’s never closed. The visibility is pretty incredible.

Check out this video from LA’s KCET-TV to go behind the scenes with Saldamando, and be learn more about her works here.