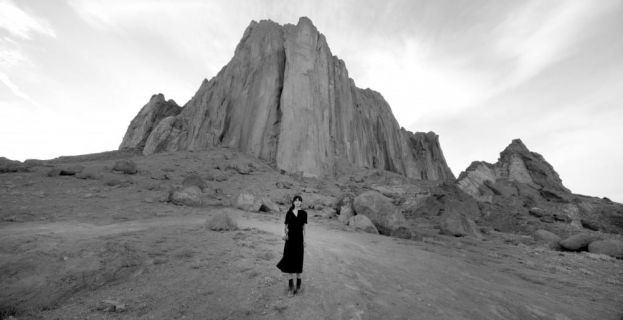 Downtown L.A.’s contemporary art museum The Broad does not feature new exhibits often, so when the museum does host a temporary exhibit, expect to see world-class artwork that is groundbreaking and culturally significant. The Broad’s latest exhibition is no exception, as the museum honors the 30-year career of Shirin Neshat with a first-of-its-kind exhibit called Shirin Neshat: I Will Greet the Sun Again.

An Iranian-born, New York City-based visual artist known for captivating and graceful black and white photography and video installations, Neshat’s work has long challenged gender identity and balanced aggressive social and religious politics with vulnerable imagery. The first major retrospective of Neshat’s work, The Broad’s exhibit borrows its name from a poem by the late Iranian poet Forough Farrokhzad and features more than 230 photographs and eight video installations that chronicle the artist’s exploration of religion, war, displacement, immigration, and the relationship between Iran and America.

Neshat was born in Iran and sent to live in California in 1975 when she was just 17. In 1983 she earned an art degree from the University of California, Berkeley, then moved to New York where she began her career. Her first project Unveiling was inspired by the changes she witnessed in her native Iran after returning to the country for the first time in 1991, and was followed up by a collection of intimate photos of hands covered in calligraphy in the Bonding series. The gun-bearing Muslim women featured in her Women of Allah collection represent Neshat’s first full body of work, and serve to honor female strength and rebellion during the Iranian Islamic Revolution of 1979.

Shirin Neshat: I Will Greet the Sun Again features pieces that have never been seen in the United States, as well as portraits that have never been shown in public. The exhibit marks the debut of Land of Dreams, Neshat’s latest film and photography collection shot earlier in 2019 in New Mexico, and carries the artist’s rallying cry for understanding and universal respect during conflict from the early 90s to present day.

Tickets for Shirin Neshat: I Will Greet the Sun Again are $20 and the exhibit runs until February 16. 2020.

*Image courtesy of The Broad